This will be my last post from my trip to France. I have many more pictures but you get the idea ; ) I heard a quote that if you spent a minute looking at each piece in the Louvre it would take about 25 days of 24-hour perusing. That'd be a great way to spend 25 days. 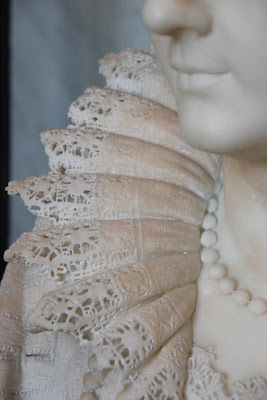 Maria Duglioli Barberini by Giuliano Finelli, 1626, detail
Exquisite! This bust stopped me in my tracks. How was marble carved that intricately in the 1600s? The lace is exquisite and the more you look at it the more you're in awe. Even the string between the pearls is realized. 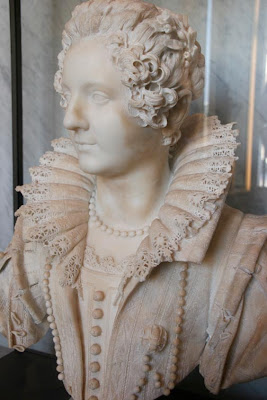 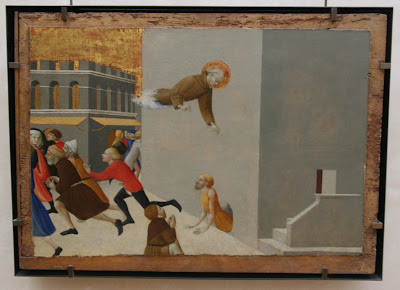 I just thought this painting was so unusual. It was painted in the 1400s and the way the figure in the sky is painted seemed modern to me - almost like something out of a comic book. From what I could make out on the plaque, this painting depicts Blessed Ranieri delivering the poor detained in a prison in Florence, who had written to him asking for help. The notation reads: Stefano di Giovanni dit Sassetta. Connu à Sienne en 1426-Sienne, 1450. 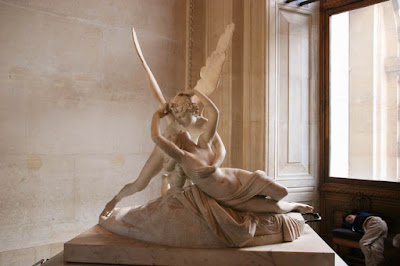 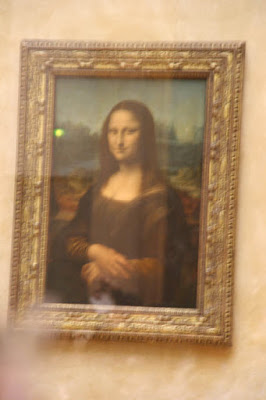 And I had to include this. Horrible shot. It was the closest I've come to feeling crushed. I mean literally, not emotionally. The crowds were just ridiculous at the moment we were in this part of the Louvre. This is the second time I've seen Mona Lisa. The first was considerably more pleasant. It is beautiful to be sure but I left with mixed emotions. Something to behold, but worthy of ALL this fame? Later in the gift shop I purchased the (excellent) book: How to talk to children about art by Francoise Barbe-Gall and this is what she had to say when asked "Was the painting famous in Leonardo's time?"
"Yes. It was very famous. Everything about it was new: the pyramid composition, the idea of showing the subject in a realistic environment, the way the subject is linked to the landscape, the use of light and shade (chiaroscuro), the sensastion of capturing a moment in Mona Lisa's smile. These were not just technical innovations: they showed a new way of looking at the world. An apparently unexceptional woman became a symbol of the whole of humanity, captured for eternity in one moment between a passing light and a shade that holds her secrets."
Posted by Kim Rempel at 5:05 PM

All that incredibly intricate work on the lace, pearls, buttons and the hair is mind boggling. Amazing talent!

These have been great posts, Kim. Thank you for sharing your art-filled trip!

How amazing. Thanks for this. I feel like I'm having a visual holiday. So amazing.

Kim, thanks you for sharing more pics... I'm especially loving the sculptures. It is so hard to believe they are marble. They are breathtaking.

I saw the Mona Lisa about twenty years ago (yikes) and although it was beautiful, it was anticlimactic. It was behind the glass and there were ropes cordoning off the immediate area in front of it so we could only get so close. And I was expecting it to be much larger. Still, it is something to see in one's lifetime if the opportunity is there.

loved all the posts on France! What a great trip-so glad you blogged it.