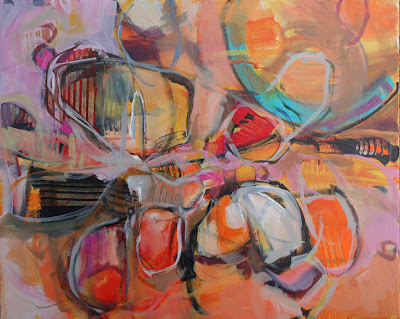 Narrative of love / acrylic on gallery wrapped canvas / 16"x 20"x 1.75"
Available through me directly or here at Saatchi online.

You may remember that about a month ago I was seriously thinking about changing professions. I was having a difficult time finding buyers for my work and feeling rather blue about the whole state of affairs. Or maybe I just told that to a few friends ; ) Anyway, this week I sold a number of paintings which is far and away a major personal milestone! I am so thankful to those who felt something in my work, and connected with it, and wanted it in their homes and offices. THANK YOU. You know, this business can be tough. I paint and paint and study and pour over books of beautiful works, and talk with people...and there can be looong dry spells. And then one day, it all kind of cumulates and presto. A bunch of good things occur.
Paint on!
Posted by Kim Rempel at 7:48 PM 11 comments:

Taking random shots of my studio today. Anyone need some art for their walls? If you see something you like or want some information on let me know and I'll get back to you asap! By the way, that mid-section of a cedar tree (red and purple painting) is the middle piece of a triptych. It would be very striking if someone has a tall wall to hang it! 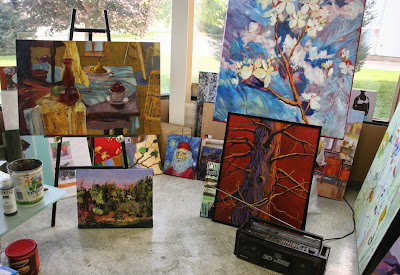 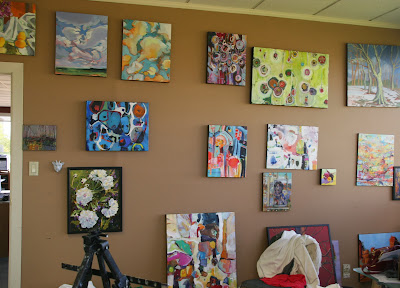 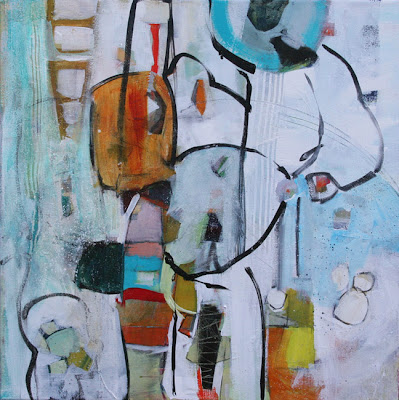 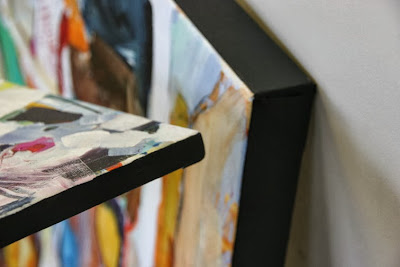 Posted by Kim Rempel at 2:37 PM No comments: 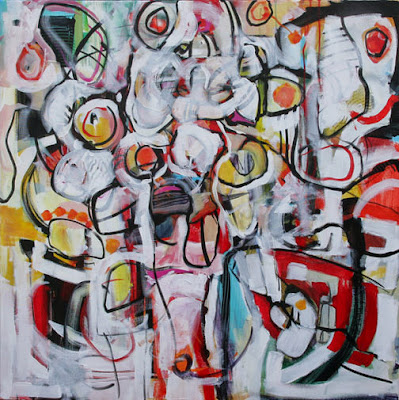 This painting came about after watching an interview with Ai Weiwei (pronounced: I wayway) by Jian Ghomeshi of CBC. It is a very powerful thirteen minutes. Do you know Ai Weiwei? Chances are if you don't know his name, you would know some of his art. He was the artistic consultant for the stunningly beautiful Bird's Nest Stadium in Beijing for the 2008 Summer Olympics.
Anyway, Jian Ghomeshi of "Q" (best arts and culture programming ever! I'm such a fan) spoke with him in his studio in Beijing and it is captivating stuff. After watching his fascinating interview I was deeply moved. And I wanted to paint a response. Mixed into this painting are thoughts of chaos, the innocence of children, being monitored...even Weiwei's shirt (if you watch the interview you'll make the connection ; )
Note: Weiwei has been in the news a fair bit lately as the Art Gallery Of Ontario is holding a retrospective of his work. The show runs till October 27th, 2013. I'll blog about it after I see it! 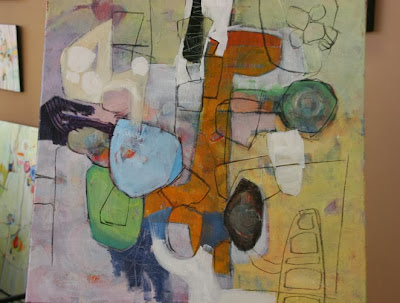 So this is what I'm working on now. Who knows what it will look like in the next couple of days. It's already had a few lives : )
Posted by Kim Rempel at 10:00 PM 6 comments:

The Breath Thief by Kim Rempel 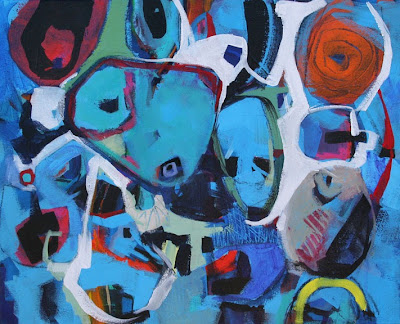 As far as I am concerned, a painting speaks for itself. What is the use of giving explanations, when all is said and done? A painter has only one language.
~Pablo Picasso
My newest painting, The Breath Thief, was tougher than tough. It morphed continually and took multiple twists and turns. I wish I had taken progress shots! I'm in this phase where I can't wait to get to my studio and paint, paint, paint. I'm dreaming of shapes and colour.
Too see more of my abstract paintings, please view my portfolio on Saatchi.
acrylic on gallery wrapped canvas / 16"x 20"x 1.75" / $560

Now on Saatchi! +The heart's a strongbox 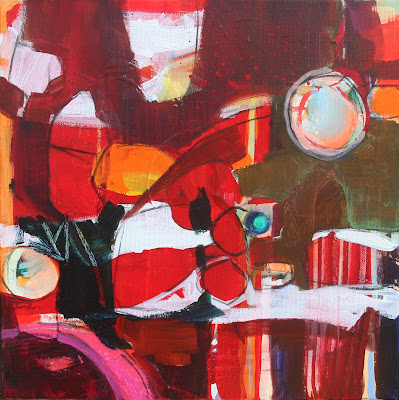 Painting is just another way of keeping a diary. ~Pablo Picasso
I am very excited to announce that my work is now on Saatchi Online. Please, please check it out!

http://www.saatchionline.com/rempel
And if you have any friends who love art or are looking to buy, I would be grateful if you shared!

Here is my latest painting, "The heart's a strongbox". I know abstract work isn't everyone's cup of tea but I appreciate your comments. It's something I feel so excited about. I actually get a rush when I'm in front of my easel, applying paint. And that's a great thing to feel.
acrylic on canvas / 12"x12"x.5"/ $240 plus shipping
Posted by Kim Rempel at 9:22 AM 7 comments:

The thing about childhood 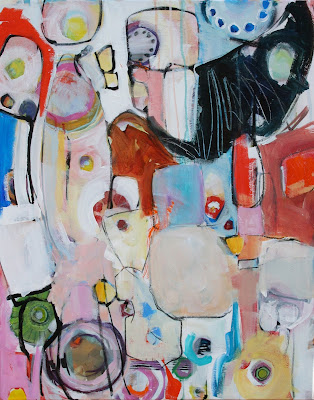 If anyone ever has any questions about my paintings (process or what-have-you) ask away! Sometimes I err on the side of brevity but I am more than happy to do Q&As. I can really chat when I get on a roll : )
"The thing about childhood" is 24"x30" / acrylic on gallery wrapped canvas.
Posted by Kim Rempel at 7:47 PM 5 comments: 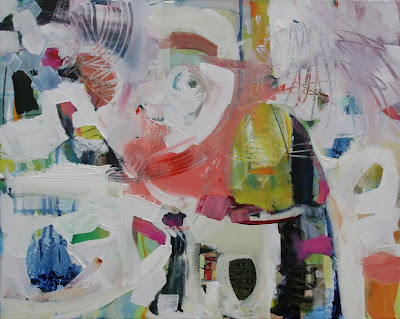 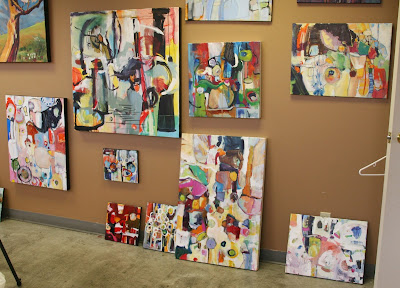 So I'm working away at a series and thought I'd share what my studio is looking like these days. A couple you may recognize from a few months ago - others have not been shown yet. These paintings are in various stages of completion. Things keep morphing and I can honestly say that after a serious period of frustration I'm feeling a renewal. Thanks to the peeps who kept me from chucking everything out the window ; )
Posted by Kim Rempel at 10:25 PM 4 comments: 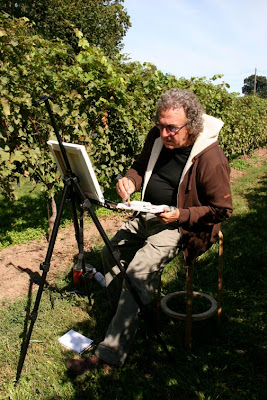 This Saturday is the last plein air class for the year at The Good Earth in Beamsville Ontario. Do you want to give it a go? All levels from absolute beginners to experienced painters are WELCOME! The day runs from 10-4 with a beautiful lunch, glass of wine, dessert and coffee at 1. As much or little instruction as you'd like throughout the day. Beautiful grounds. Please contact The Good Earth to register! 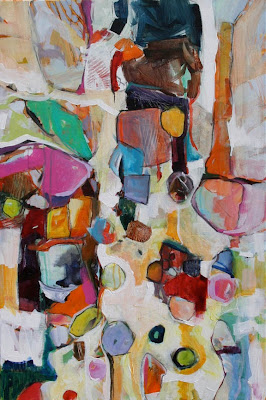 This is my latest piece. It is large: 24"x36" I believe (forgot to measure ; ). Title to come. I really enjoyed building the layers, finding rhythms, laying down colour, scrubbing...all of it. Below is a detail. Oh - and Happy September! Hope everyone's well and enjoying fresh starts. Cheers. 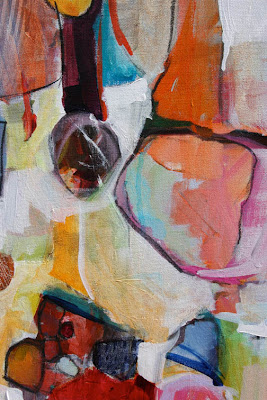