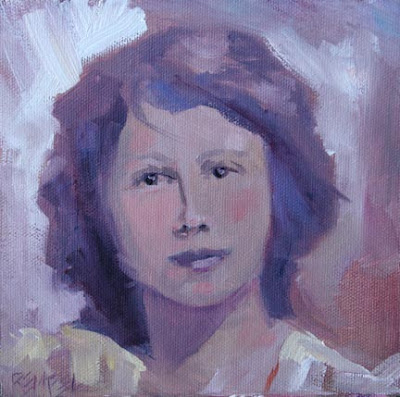 I've openly stated (many times!) when I've been frustrated and felt like I'd lost the ability to paint. And so it's so nice when you finish a piece and just feel...happy!
This didn't start out so well. First it was a painting of my bleeding heart flowers. Really bad. Wiped it down. Next it was a lush yellow tulip. That went south faster than the bleeding hearts. After another good wipe I almost left the studio thinking it just wasn't in the cards and then I decided to try a portrait. There was no one around to model so I flipped through some old magazines and found a number of photos reprinted from the 30s and some of the people caught my eye. They were yelling: paint me! So I complied. This one, as they say, fell off the brush. To me I imagined this dress was soft yellow and she was off to a dance where there would be lemonade and sweets. I'm going to try more in the coming days.
6" x 6" / oil on archival panel / $75
Posted by Kim Rempel at 5:40 PM

Wow, this is really great! Your brush strokes are so loose and spontaneous...and you have captured a very innocent look. Yes I agree..soft yellow dress and lemonade!
Thanks for the positive comments. It certainly helps after the day I had.

Captivated by the direct, assured, powerful strokes of the brush. I like the understated color and soft light.

Wonderful portrait Kim...the paint fell off the brush to make this captivating image.

Sweet little portrait Kim! Such an air of innocence too. I like the limited palette.
Nice to hear from you on my blog - thanks for the kind words!

Well we had that in common yesterday I spent hours on a painting only to later scrape it all of and reclaim the canvas.

What a great portrait Kim and the thoughts it provkes. Anytime you are stuck for a face to paint you could paint the old guy who lives behind my bathroom mirror. He speaks to me everymorning and talks such nonsense.

hi Kim, i laughed as i read your post: it was either that or cry as i know that feeling soooo well, walking around feeling lost as a wiped down canvas winks at me at the corner of my eye. then suddenly something happens. lovely handling of values not only in this piece but in the others too. and a great blog. will visit again:)

Wonderful portrait!!!!!! Way to go Kim - you need to do more of these. (I wiped my down last night as well)

Kim, This is perfect, nice and loose but giving the information we need. I especially like the way you handled the hair and her eyes.

The softness of the colours - even the darks - are beautifully achieved.... they speak "nostalgia".
The painting you were interested to see is posted now and also happens to be a portrait.
Thankyou for becomming the first follower of the K & C blog - it was a lovely surprise.

Beautiful painting Kim! Reading about your trials and persistence is a real encouragement. Thanks!

Truly beautiful portrait Kim!! And I can't believe you ever feel like you can't paint, your work is GORGEOUS!! What? You didn't hear me?! Well I'll say it again. . . GORGEOUS!!!

I love the quiet mood of her gaze in contrast with your powerful, confident brushstrokes. Just stunning.

Kim, this is so soft and beautiful. Well done... I'm glad these photos called to you... just what the doctor ordered it seems! No more wiping!