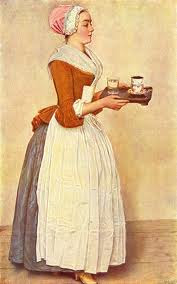 The Chocolate Girl by Jean Etienne Liotard
1702-1789 / pastel on parchment
This is the first painting I have picked for "ART LOVE" because it was introduced to me around 1985 by a very special man (with the most wonderful family) Erich Herrmann who at the time lived in Dresden, East Germany. I was in art school and eager to absorb everything I could, and Erich who was well-cultured in the arts took me aside and wanted to show me his most favourite painting. I loved that he spoke to me so eloquently and passionately about this beautiful pastel and I was equally enamoured that this man had a favourite painting! It was kind of new to me that someone not working in the arts would have such a love of them. I've come to think of that as a bit of a European trait ; )
He later gave me a book as a souvenir called: Guide to the Old Masters Picture Gallery Dresden which showcases this painting. The book in part says:
Count Algarotti purchased it in Venice in 1745 for the Dresden collection. In a letter dated 1751 to his friend....he wrote:


I have bought a pastel picture about three feet high by the celebrated Liotard. It shows a young German chamber-maid in profile, carrying a tray with a glass of water and a cup of chocolate. The picture is almost devoid of shadows, with a pale background, the light being furnished by two windows reflected in the glass. It is painted in half-tones with imperceptible graduations of light and with a perfect modelling...and although it is a European picture it could appeal to the Chinese who, as you know, are sworn enemies of shadows. With regard to the perfection of the work, it is a Holbein in pastel.

Algarotti wrote to Brühl in 1746 that all the Venetian painters, and even Rosalba Carriera herself, considered The Chocolate Girl to be "the most beautiful pastel ever seen".

That is truly a charming painting. And I loved the story. I can just picture you as an art crazy college student. :)

well I can see why you admire it so!

I love the new feature on your blog and The Chocolate Girl is a beautiful one to start it off. Can't wait to see more.

Great idea on educating us in art history. I am going back to school this Fall to get my degree in Fine Arts. I'm excited.

I like that you are helping all of us learn about artists and your first choice is just wonderful! This is going to be fun and interesting as you continue. Thanks!