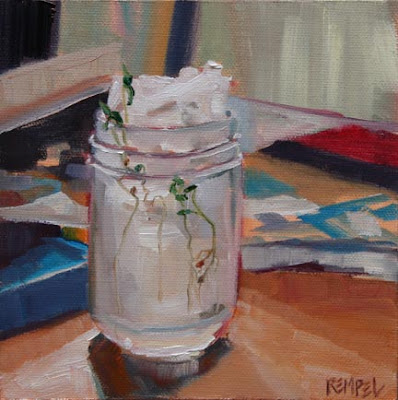 So I sliced open the tomato and *surprise*! There were a handful of seeds inside that had tiny little roots and from the other end...sprouts! Two of the sprouts were even topped with baby leaves. I'd never seen this before. I did an online search and sure enough, others have had it happen too. And then, as these things go, it happened twice more in the following weeks. Weird. So I did the thing many of us were taught to do in grade school - with the bean seeds - and wrapped them between a damp paper towel and a jar and set it near the window. The roots grew longer and the stems shot a little higher.
Regarding the technical aspect of the painting: Bumpy jam jars with rolled up wet paper towel, lit from behind, gave me a bit of a workout : ) Part 3 on Monday.
6" x 6" / oil on panel / $75
Posted by Kim Rempel at 1:25 PM

Email ThisBlogThis!Share to TwitterShare to FacebookShare to Pinterest
Labels: experiment growing seeds in glass jar with paper towel, sprouts inside, tomato on the vine

How interesting! I've never heard of anything like this. Love the painting with the little sprouts in the jar. Looking forward to part 3!!

What a great painting and the story is inspiring! I knew right away that it was paper toweling you did a nice job. I also like the perspective in the background.

Thanks Linda and Linda! And I'm so happy you knew that it was paper towels : )

I learn something every day it seems. I love this painting Kim. You captured the luminosity of the back lit paper towels and those very delicate teeny roots. Amazing!

How cool is that? Makes for an interesting story and a very appealing painting!

I agree with Sheila..the jar looks so luminous with the paper towels. When I looked at the blog list thumbnail, I thought it was some new mixed tomato drink! I like the orange and blue background. It works well.
Keep us posted on the tomato plant results!

Well, you may have gotten a workout, but you came through with flying colors! Really readable, and nicely loose! I struggle with this so! I love the story, too. You are a tender heart, girl!

And I love the "mother ship" it came in that you painted in your previous blog... nice!