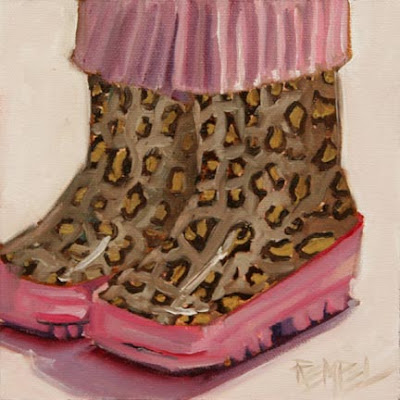 This summer while visiting the Canadian War Museum in Ottawa, Ontario I saw the exhibit: Camouflage - From Battlefield to Catwalk. It was a fascinating look at the history of camouflage. I must say, after walking through the first part of the exhibit and seeing the original applications it felt like a jolt to see - near the end of the exhibit - the design plastered on children's products and baby onesies. And have any of you heard of Dazzle Ships? Fascinating! After reading about them at the museum I saw the painting "Dazzle-ships in Drydock at Liverpool" (1919) by Edward Wadsworth the next day at the National Gallery (shown above). Here is an excerpt on Dazzle Ships from Wikipedia:

At first glance Dazzle seems unlikely camouflage, drawing attention to the ship rather than hiding it, but this technique was developed after the Allied Navies were unable to develop effective means to disguise ships in all weather.

Dazzle did not conceal the ship but made it difficult for the enemy to estimate its type, size, speed and heading. The idea was to disrupt the visual rangefinders used for naval artillery. Its purpose was confusion rather than concealment.[1] An observer would find it difficult to know exactly whether the stern or the bow is in view; and it would be equally difficult to estimate whether the observed vessel is moving towards or away from the observer's position.[2]

Kim dear,
Your painting is amazing, as always!
you have an objective painting and clean,
I love thy feature of this ;))

and "Dazzle Ships" is really a fascinating idea!

Camo + pink = girly happiness. At least for me :) I love these fun playful boots! Awesome work Kim. And that ship is amazing! And. . . wierd too. :)

Fun boots! Ties in nicely with the interesting info on Dazzle Ships. I wonder if this works for Zebras too...
:o)
Kim

finally I was able to tell my husband something about the military that he didn't know! LOl thanks

Those boots were a great subject!

Both are very cool.
The ship thing is amazing!

I want these boots...how FUN! Great job on the shiny rain-boot material.

Fascinating info on the Dazzle boats! I like the way you tied the story in with your Camo boot painting too.