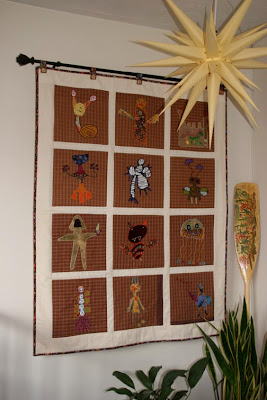 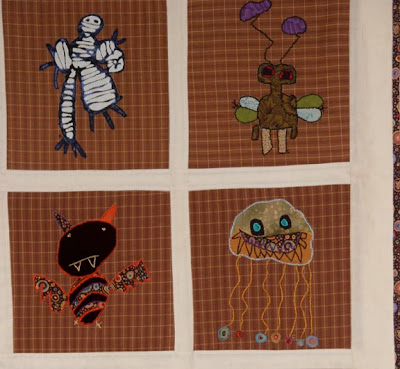 Three years ago (!) on my blog I posted pictures of these monsters I was stitching to be sewn into a quilt as a keepsake. They were made from drawings my kids did on paper with marker over the course of 2008. Finally....the quilt is now done and hanging. I am so happy! Plus, they don't draw like that anymore so it's a great memory of a stage in their lives.
I have three people I want to thank for help in this project. The first is Iris. It was at her house where I first saw an embroidered picture she had done from one of her children's drawings (who is now a man). It utterly charmed me and it was her work that inspired the whole project! Then I have to thank Donna who taught me how to stitch (and who before that told me: Sure I could make a crazy quilt (which I made before I began this project) even though I didn't know how to sew or own a sewing machine! She also took all these finished squares and sewed the muslin trim around them. Then I have to thank Mary for taking it back to Alberta with her and sewing on the trim, tabs and backing. It was now ready to hang! My husband put it up on the weekend and I am so glad it's finally done.
For the quilt squares I tried to stay as close to their drawings as I could. I really wanted to be true to their visions of their monsters. So for example where they outlined things in orange, and coloured in purple, I found threads and fabrics to portray that. There were some drawings that they made in pen and I asked them what they had envisioned for those and then used my own judgement. I also embroidered their initials beside their monsters so that years down the road we could remember whose was whose.
Posted by Kim Rempel at 8:07 PM

What a great idea. I'm thinking of the files of my sons' drawings I've kept and wish I'd done something like this. It's wonderful, and so are you. What a lovely, dedicated and stunningly creative Mom you are.

What a great idea for a keepsake quilt! I started quilting about 25 years ago and really admire the creativity and workmanship that goes into them. This one is a gem!

What an awesome idea- and so well done! Such an amazing keepsake.

Your wonderful paintings must of been gracing my inbox for the past 3 years because I remember seeing these monsters before. It looks great and such a neat idea. Congratulations on getting it accomplished.