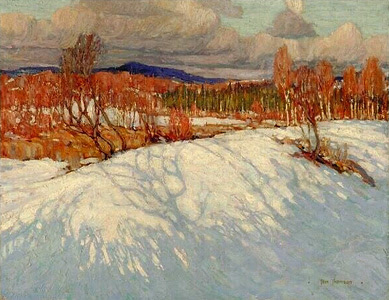 Image credit:
Tom Thomson, 1877 - 1917
In Algonquin Park, 1914
oil on canvas
63.2 x 81.1 cm
In memory of Norman and Evelyn McMichael
McMichael Canadian Art Collection
1966.16.76
I was at a cottage this weekend and didn't get any painting time in so I decided to post another Art Love : ) Today's offering is from Tom Thomson, the iconic Canadian painter and unofficial member of The Group of Seven. I've read that Thomson's work inspired the Group of Seven's formation although he never lived to see the birth of The Group due to his mysterious, untimely death in 1917. The best book I've found of their work is The Group of Seven and Tom Thomson. The artists painted the Canadian landscape with power, dedication and great spirit. The original seven were: J.E.H. MacDonald, Lawren Harris, A.Y. Jackson, Arthur Lismer, Franklin Carmichael, F.H. Varley and Frank Johnston. They later grew to include A.J. Casson, Edwin Holgate and LeMoine Fitzgerald. Tom Thomson and Emily Carr are strongly associated with the Group. I'll be posting much more of their work over the next few months.
Posted by Kim Rempel at 9:14 PM

Oh my goodness, Kim. I can't even adequately express how much "ArtLove" I feel for Tom Thomson and The Group of Seven. I vacillate between who is my favorite next to Tom Thomson. Right now it could be Fred Varley... for his amazing portraits. I have a book on Varley that has the most ridiculously fantastic self-portrait. Thank you for this post and hopefully some of your readers that aren't aware of this amazing part of Canadian art history will leave wanting to find out more.

Tom Thomson was a great painter. His drowning was tragic. Read more about them in Algonquin Elegy: Tom Tom Thomson's Last Spring by Neil Lehto.

ooo, this is wonderful kim, thank you for sharing! the shadows on the snow make me tingle!

I am blessed to live close enough to both the Art Gallery of Ontario with its collections of Tom Thomson and The Group of Seven, and the McMichael Canadian Collection. I feel like I learn so much every time I look at their work. For Canadian painters that paint almost gets into our veins. I love, love, love their work and this post.

Love this painting, great warm and cool colours and composition. Thanks for posting Kim, A.J. Casson is probably my favorite but they are all masters in my mind, look forward to more.

I KNOW, right? The shadows on the snow!!! Nicki, I will look up that portrait, will check out "Last Spring" and Barabara - I feel the same way. Dave, I LOVE Casson too.

Thanks for the lead on the book. Can't have enough good reads. I love Tom Thomson and the seven.
Thanks for this great post.

Can't wait to find this book, thanks for introducing me to this Thomson & this group!

I was in the McMichael art collection this year and had a lovely convorsation with one of the guides. She pointed out that you can actually see Toms shadow in the snow if you look hard enough.